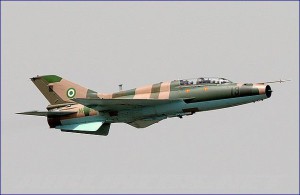 On November 16, an Intelligence, Surveillance and Reconnaissance, ISR, aircraft reported a gathering of BHTs under a tree at Kadari.

An alpha jet on armed reconnaissance was called in to strafe the location thus killing a number of the insurgents and causing survivors to flee in different directions.

On November 18, NAF fighter jets again carried out a series of coordinated air strikes against BHT locations at Ngoshe.

The strike, carried out by a 3-ship formation of alpha jets against 5 carefully selected BHT targets, was part of Operation Rescue Finale by the Nigerian Army.

A similar air strike was conducted on another BHT location near Kangarwa on November 19. Based on ISR aircraft request, an alpha jet was scrambled for air interdiction at a location close to Kangarwa.

The NAF, same day, provided ISR cover for own ground forces advancing from Ngoshe to Pulka. Please find enclosed the declassified video of the latest air strikes for your use.