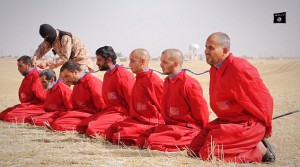 The men come from Egypt, Nigeria and Ghana, Islamic State said in a statement on social media, without elaborating.

The kidnapping took place in Noufliyah, an Islamic State stronghold southeast of the city of Sirte, said a resident, asking not to be named.

Mohamed El Hejazi, a military spokesman loyal to the internationally recognised government based in the east, also said the abduction happened in the small town.

The militant group has expanded in the North African country by exploiting chaos and a security vacuum like it did in Iraq and Syria.

The official government has been based in the east since losing control of the capital Tripoli a year ago when a rival group called Libya Dawn seized it, setting up its own parliament and government.