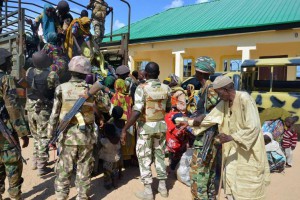 “During the operation, the team made contact with Boko Haram terrorists at Kudiye, Mijigete and 20 Boko Haram terrorists were killed, while three rifles, 41 motorcycles were destroyed and 370 hostages rescued and brought to an Internally Displaced Persons’ camp at Dikwa,” Irabor, who is in charge of the operations, said Friday. It was not immediately clear how many women were among the hostages and whether any were the missing Chibok schoolgirls.

Nigerian forces killed more Boko Haram militants during several other encounters this week, clearing their camps and hideouts in a number of villages. The troops recovered countless guns, rounds of ammunition, supplies, provisions and other equipment.

In one encounter, the insurgents saw the Nigerian army approaching and abandoned their camp, leaving behind their families, including five women and a dozen children. Troops caught up with the fleeing militants and killed them. The women and children were being interrogated, Irabor told reporters Friday.

During a presidential media chat last month, Nigerian President Muhammadu Buhari said his administration has no reliable information or intelligence on the whereabouts of the Chibok schoolgirls who were kidnapped last year by Boko Haram. Buhari said the Nigerian government was willing and ready to negotiate with the Islamic extremist group without any preconditions in order to retrieve the girls.

“The honest truth is that I don’t know the actual place and state of the girls. The more reason we are trying to be very careful before we negotiate with any group. Before we negotiate with any group, we must make sure they show us the actual location of the girls. We must make sure they are complete,” Buhari said during the live, televised event in Nigeria’s capital Abuja on Dec. 30. “We are looking for a credible Boko Haram leadership that will convince us that the girls are here and alive.”

Boko Haram militants descended on a boarding school in northeast Nigeria on the night of April 14, 2014. By morning, the militant group had herded 276 schoolgirls into trucks and vanished behind the forest brush in the town of Chibok. Some of the girls have managed to escape on their own since then, but over 200 are still missing, and government search efforts have been unsuccessful despite a global social media campaign and pleas from international leaders.

Buhari said rescuing the Chibok girls and securing the country was among his administration’s top priorities. He has insisted his government has made some headway, while acknowledging there was “still a lot of work to be done in the area of security.”

“This government will not consider the matter concluded until the terrorists have been completely routed and normality restored to all parts of the country that have been adversely affected by the Boko Haram insurgency,” Buhari said in an interview with BBC News on Dec. 31.

Boko Haram, which launched an Islamic insurgency in northeast Nigeria six years ago, has killed 6,644 people in 2014 alone, a 300 percent increase over the previous year. The Nigeria-based terrorist organization has ramped up its attacks since Buhari took office in May, targeting civilians with ambushes in quiet villages and suicide bombings in crowded market places.