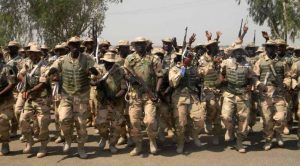 In the same vein, the Nigerian Air Force (NAF) said it routed scores of armed bandits and fighters in the North-western part of the country since July.

The army said troops of Sector 2, Operation Lafiya Dole engaged some terrorist elements who attempted to attack their location at Kagarko about 41kilometres North of Buni Yadi in Yobe State at about 7pm yesterday.

“The attack was repelled and reinforcements have been sent to the general area,” it said in a tweet.

Speaking during an operational visit to Katsina and Zamfara States, the Chief of the Air Staff (CAS), Air Marshal Sadique Abubakar, said the NAF was determined to flush out armed bandits and criminals from the Northwest of the country.

The visit, which was aimed at assessing the progress of Operation Diran Mikiya, also afforded the CAS the opportunity to ascertain the state of facilities at NAF Base, Gusau as well as interact with the troops.

While in Katsina, the CAS, who was accompanied by other senior officers from NAF Headquarters, also paid a courtesy visit to the Katsina State Governor, Aminu Bello Masari, at Government House, Katsina.

In Katsina, the Air Task Force (ATF) Commander Operation Diran Mikiya, Air Commodore Ayo Jolasinmi, while briefing the CAS on the status of the operation, reported that significant successes had been achieved since the operation began on July 31, 2018, noting that the ATF had flown about 740 hours in 540 surveillance and combat sorties, resulting in the decimation of scores of armed bandit kingpins and their fighters as well as the destruction of several camps and hideouts with thousands of rustled cattle recovered.

The CAS commended the ATF commander and his team for their efforts and urged them to re-strategize in order to further effectively tackle the evolving nature of the threat within the area, while working closely with surface forces and other security agencies.

During the earlier courtesy visit to the Executive Governor of Katsina State, the CAS expressed profound appreciation to the Government and good people of the State for the immense support the NAF had enjoyed since Operation Ditan Mikiya began.

Air Marshal Abubakar pledged the commitment of the service towards ensuring that the activities of the armed bandits are brought to a complete stop and normalcy restored to the affected areas.

He informed the governor that he was in Katsina to assess the progress of the operation with a view to re-strategizing for improved results.

In this regard, the air force chief intimated the governor that the NAF was establishing a Forward Operating Base (FOB), along with a helicopter landing pad and support facilities, at Birnin Gwari in Kaduna State.

This, he said, would further strengthen NAF’s ability to deal with the armed bandits, while working in synergy with other security agencies.

Governor Masari responded by appreciating the CAS for the unwavering commitment shown by the NAF and the tremendous contributions made by the Service in dealing with the menace of armed banditry. He acknowledged the successes recorded since the commencement of Operation Diran Mikiya, noting that over 250 armed bandits reportedly fled across the border to Niger Republic as a result of NAF air strikes in the months of August and September.

He, however, stated that the recent resurgence of the activities of the armed bandits required the intensification of operations to effectively deal with the criminals. He said, on its part, the Katsina State Government would increase advocacy to limit the involvement of youths in the border areas while continuing to facilitate the provision of useful information to security agencies.

At Gusau, the CAS was received by the Commander 207 Quick Response Group (207 QRG), Squadron Leader Sunkanmi Akinbohun, as well as the Speaker of the Zamfara State House of Assembly, Alhaji Sanusi Rikiji, other top government functionaries and heads of security agencies in the State. He was conducted round facilities within NAF Base Gusau, including fuel storage facilities and some buildings that had been repaired after their roofs were blown off by rainstorms earlier in the year. Air Marshal Abubakar subsequently received a briefing from the Commander 207 QRG and later addressed the troops encouraging them to remain focused on their assignment.

He also urged them to conduct themselves professionally and deal ruthlessly with the armed bandits while ensuring they respect and protect civilians in their places of deployment.