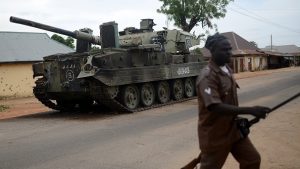 The Nigerian Army announced that people who will be travelling through the northeastern states of Adamawa, Borno and Yobe must carry identification cards in an effort to weed out members of Boko Haram and Islamic State, like reported by newsaf.cgtn.com.

The Army said that “Operation Positive Identification” was necessitated by credible information that some criminals were taking refuge in some towns and villages of Borno and Yobe States in particular and the North East zone in general.

“Our troops have been instructed to strictly check valid means of identification such as National Identification Card, Voters Registration Card, Drivers’ License and International Passports, or other valid official identification, before allowing such person passage. We, therefore, once again enjoin all to fully cooperate with troops and security agencies in carrying out this exercise,” a statement by the Army read in part.

The Army further cautioned persons who will not be positively identified that they will be subject to further investigation to determine the question of their possible involvement in activities with the insurgents or otherwise.

“The general public is please requested to bear with this measure as it is in their best interest and our national security, as well as efforts to end the madness called insurgency as perpetrated by the erstwhile Boko Haram/ISWAP fighters,” the statement concluded.

The Army had previously warned residents against aiding and abetting the escape and sheltering of militants whom they had flushed out from hideouts in the Lake Chad and region and northern Borno.

Additionally, the Army shut down the operations of Action Against Hunger, a non-governmental organisation, for allegedly aiding Boko Haram Terrorists and Islamic State West Africa by supplying them food and drugs despite warnings not to do so.

Nigeria’s army has previously been embroiled in disputes with NGOs working in the country’s troubled northeast, where terrorist networks continue to stage deadly attacks, accusing them of undermining efforts to fight terrorism.

The northeast region has been destabilized for over a decade by Boko Haram, which most notoriously kidnapped hundreds of schoolgirls in 2014.