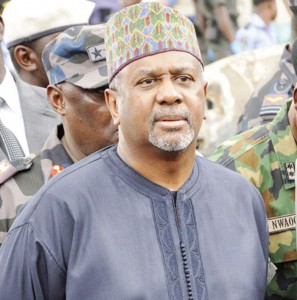 Following allegations of lack of equipment to fight Boko Haram, the immediate past National Security Adviser, Col. Sambo Dasuki (rtd), yesterday said the administration of ex-President Goodluck Jonathan bought sophisticated equipment in the last one year to fight insurgents in the Northeast.

He said the weapons assisted the military to recover many local government areas that were occupied by Boko Haram terrorists.

He also said the acquisition of the equipment checkmated Boko Haram leader, Abubakar Shekau from disrupting the general elections on March 28 and April 11.

He made the clarifications in an interview with PRNigeria, which is an undercover and alternative channel of communication by the military, against the backdrop of alleged neglect of the military by Dr. Jonathan.

A former Chief of Defence Staff, Air Chief Marshal Alex Badeh, had at his Pulling-Out Parade complained about lack of equipment to fight Boko Haram during his tenure.

The immediate past Chief of Army Staff, Lt. Gen. Kenneth Minimah on Wednesday expressed regrets that the nation toyed with the health and vitality of the military through inadequate funding.

He appealed to the government to create the right environment for recruitment, training, equipping and kitting of military personnel.

Dasuki said:  “The armored tanks have comprehensive Nuclear, Biological, Chemical (NBC) protection/sensor  system, just as we deployed Mine-Resistant Ambush Protected (MRAP) vehicles that we bought and could withstand Improvised Explosive Device (IED) attacks and ambushes. The vehicles had protected our troops from the land mine threats.

“We are glad that we also provided assorted Armoured Personnel Carriers (APCs) to transport troops to the battlefield. They are armed for self-defence and to provide protection from attacks from shrapnel and small arms fire.

“All these were acquired in the last one year after years of frustration by Western powers who denied us of the equipment and sabotage our efforts to acquire same from other sources which are reasons for some delay in delivery.”

Despite criticisms, he insisted that the equipment assisted in “curtailing Boko Haram.”

He said: “We utilised some of these equipment to recover more than 22 local government areas under Boko Haram terrorists and ensured that Shekau did not disrupt the 2015 election as he had threatened.

“Not only did we ensure that the elections were peaceful, Shekau has never spoken to threaten anyone again since then.”

Dasuki said some military hardware paid for by Jonathan administration would be delivered on or before the end of August.

He added: “Some other arms already paid for by the previous administration are due to be delivered soon.

“It was unfortunate that some elements are frustrating the efforts as we even had to query some suppliers for delay in delivery of arms and ammunition.

The former NSA faulted critics of the administration of Jonathan on security.

He said such critics should be careful not to destroy sensitive institutions like the military.

He said: “In an attempt to rubbish individuals for whatever reasons, political or otherwise, we should be careful not to rubbish sensitive institutions and their personnel that might still be in active the service.

“It is unfortunate that some elements hide under the cover of anonymity in the media to rubbish some of the sacrifices we made. They should take the courage to come out publicly by identifying themselves with their baseless allegations. “

Badeh had in his valedictory address said:  “Over the years, the military was neglected and under-equipped to ensure the survival of certain regimes, while other regimes, based on advice from some foreign nations, deliberately reduced the size of the military and under funded it.

“Unfortunately, our past leaders accepted such recommendations without appreciating our peculiarities as a third world military, which does not have the technological advantage that could serve as force multipliers and compensate for reduced strength.

“Accordingly, when faced with the crises in the North and other parts of the country, the military was overstretched and had to embark on emergency recruitments and trainings, which were not adequate to prepare troops for the kind of situation we found ourselves in.

“It is important therefore for the government to decide on the kind of military feas it needs, by carrying out a comprehensive review of the nation’s military structure to determine the size, capability and equipment holding required to effectively defend the nation and provide needed security.

“This is based on the fact that without security, there cannot be sustainable development. The huge cost that would be required to rebuild the Northeast and other trouble spots in the country could have been avoided if the military had been adequately equipped and prepared to contain the ongoing insurgency before it escalated to where it is today.”