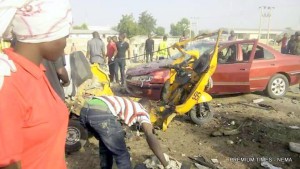 Two persons were confirmed killed Wednesday night in Maiduguri, Borno State, as a suspected Boko Haram suicide bomber detonated himself outside Muna Garage, a busy bus station that has recently become a major target for the insurgents’ attack.

Located along Maiduguri-Gamboru road that was recently opened for commuting, after soldiers freed it from Boko Haram control, Muna Garage has become a hotspot for suicide attacks.

According to witnesses, the Wednesday night suicide bomber attempted to enter the bus station at about 9 p.m. but suddenly exploded at the gate.

He died instantly alongside a passerby.

“Two persons including the suicide bomber died on the spot, while a Mercedes Benz car REG No AX 571 ABJ which was parked by the road side was damaged by the impact of the explosion. Normalcy already restored,” Mr. Isuku said.

Boko Haram have stepped up their hostility since October 12 when they released 21 of the 209 abducted Chibok schoolgirls to the federal government after a cloudy negotiation deal.

There have been reports that government paid a lot of money to the insurgents for the release, an allegation the government has denied.

The Nigeria military has repeatedly said it has degraded the ranks of the Boko Haram who now have more foreign fighters in their ranks.