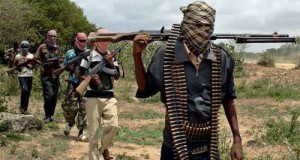 No fewer than 10 troops and 7 civilians were killed in the attack.

The troops were attacked at about 3:15 p.m. on Saturday in the remote village of Talala in Damboa local government area on the Borno State-Yobe State border.

Vigilante sources told SaharaReporters that they lost 5 members of their vigilante group and 2 members of the civilian Joint Task Force. Three others were severely wounded in the attack.

“I was supposed to be part of the mission but I was not strong. We planned to attack them near Talala, a village called Gotiril, some 30 kilometers away from Damboa town. Before our people reached there, the terrorists ambushed and killed soldiers and 7 people [civilians]. But the troops also killed 5 terrorists,” a local vigilante told our correspondent.

A military source disclosed that the troops were ambushed by terrorists before they reached their target. According to the source, the troops fought hard and killed some of the terrorists.

“We lost some soldiers but the casualty figure was not high,” the military source said.

In a similar development, a male suicide bomber was on Sunday morning shot and killed before gaining access to Bakassi Internally Displaced Persons (IDP) camp in Maiduguri.