Troops of 153 task force base, on Thursday, at old Marte, continued chase of Boko Haram terrorists after they carried out an unsuccessful attack at about 5:50pm on Wednesday. 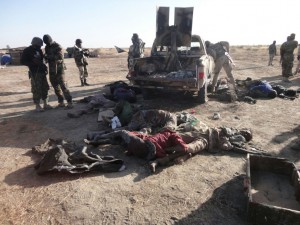 During the operation, troops killed 5 additional fighters. The casualty on the part of the Boko Haram sect stands at 21.

The Army recovered 10 AK47 rifles in all.