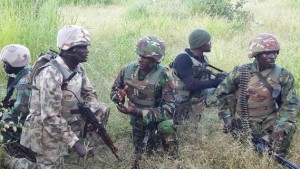 A total of 38 hostages have been rescued by Troops of 8 Task Force Division involved in Operation HARD­KNOCK on Tuesday in the general area of Dumba village, Northern Borno in Borno State.

Those rescued comprised 19 women and 19 children.

In a statement on Tuesday, Army spokesman, Col Sani Us­man said that six of the captors have been killed while others escaped with gunshot wounds.

About 22 motorcycles have been recovered including flags and other items.

He said: “The troops of 8 Task Force Division have com­menced an operation code­named Operation HARD­KNOCK to clear pockets of Boko Haram terrorists hiding in remote areas of Northern Borno.

“The troops have rescued 19 women and 19 children held hostages in Dumba village by the terrorists. During the rescue operation, the troops neutral­ised six Boko Haram insurgents while others fled with gunshot wounds leaving behind 22 mo­torcycles, flags and other items.”