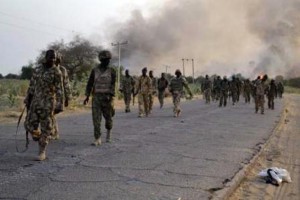 Over 30 members of the dreaded Boko Haram sect were killed in a gun duel with Nigerian troops assisted by local vigilantes yesterday morning.

Nigerian troops with the assistance of local vigilantes had laid an ambush for the insurgents between the border villages of Kirchinga/Imirsa which came under Boko Haram attacks in recent times leading to the death of innocent residents.

A local vigilante operative who participated in the campaign told our reporter that following intelligence report about the movement of the Boko Haram insurgents, an ambush was laid which resulted in the killing of many Boko Haram members.

“Following information about the movements of the Boko Haram we got, we decided to lay an ambush in the early hours of Sunday. Our efforts yielded results as we succeeded in killing over 30 of the insurgents after a fierce gun duel.

“We confiscated many weapons from the invading terrorists, including AK 47 assault rifles, bows and arrows and other dangerous weapons,” the source said.

The onslaught against the insurgents followed increased attacks on parts of Madagali local government leading to the death of three soldiers and the abduction of one senior military officer alongside his operational vehicle.

“The insurgents who disguised as local vigilante mounted road blocks across the highway and pretended to be carrying out routine checks. The soldiers were lured into the booby trap of the insurgents who immediately swooped on them and killed three soldiers and abducted one of the soldiers,” the source said.

In a similar vein, reports from Kirchinga village in Madagali Local Government of Adamawa State indicated that a fierce gun duel was taking place between Nigerian troops and Boko Haram insurgents who launched attack on the village on Saturday afternoon.

Governor Muhammadu Umaru Jibrilla Bindow assured residents of the affected communities that the state government will continue to support the civilian JTF and local vigilante groups to fight the insurgents.

Efforts to reach the Army PRO for comments by the time of filing this report were abortive as his numbers were switched off.