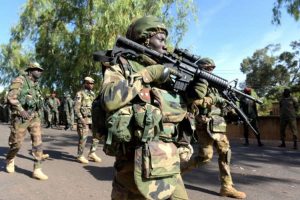 Troops foiled an attempt by Boko Haram fighters to invade Maiduguri, the Borno State capital, like reported by punchng.com.

If they had succeeded, the otherwise peaceful Christmas celebration in Maiduguri would have turned tragic.

Since the war on the Boko Haram insurgents became full blown six years ago, residents have been locked in during religious festivals and this was the first Christmas to be celebrated with Christians allowed to attend worship centres.

The services were, however, under heavy security watch as many churches were guided by police even as pockets of security screenings were made on the streets to prevent security breach.

Just as everyone thought the day was peaceful, gunshots rent the air at about 5.30pm sending everyone scampering into safety.

Our correspondent gathered that the soldiers had engaged insurgents who were trying to enter the town.

A soldier, who spoke on condition of anonymity, said Boko Haram insurgents attacked Molai, a village of about five kilometres away from Maiduguri.

The soldier, who was one of those at a checkpoint at Molai, told our correspondent that a large number of Boko Haram fighters were moving towards the town but were engaged by the military.

A senior military source, who spoke on condition of anonymity, said the Christmas day attack was anticipated and all military and security agents were put on red alert.

All attempts to get details of the attacks from both the Army and Police were unsuccessful as their spokesmen did not respond to text messages sent to their mobile phones by our correspondent.