You are here: Home / Africa / Nigeria: terrorism and the menace of porous borders 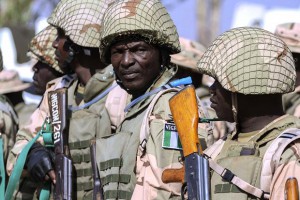 Until a few years ago, the issue of border security was not something most people in Nigeria gave much thought to – or any thought at all. But today, Nigerians are witnesses to a deluge of problems caused and aggravated by inadequate security at the country’s borders. Sentiments bordering on the need to tighten security at the borders have become a sort of national mantra.

Minister of Interior, Lieutenant General   Abdulrahman Danbazzau (rtd), echoed those sentiments last week when he lamented the menace of porous borders in the fight against terrorism. Danbazzau disclosed on Tuesday in Sokoto that out of about 1, 500 identified border crossings into Nigeria, only about 100 were manned by the security agencies. The rest are left as free entry and exit points for all sorts of persons and goods.

The growing concern about border security is, of course, due to the unremitting terrorist atrocities, which, in most cases, are organised abroad and imported into the country or largely fanned from across the borders.

Thousands of people have been killed by terrorists in the country since the Boko Haram insurgency started in 2009. These killings have occurred mainly in areas within the North-east states of Borno, Adamawa, and Yobe that share borders with Nigeria’s West African neighbours, like Cameroon, Chad, and Niger. These areas have formed the epicentre of the insurgency, highlighting the fact that most of the terror attacks Nigeria has witnessed are actually cross-border raids by guerrillas who hit targets and escape to bases outside the country.

The critical role of border security in Nigeria’s fight against terrorism is well acknowledged by the Nigerian government and the citizens. In a valedictory speech in 2014, to mark his exit from the Nigerian Army, former Chief of Army Staff, Lt. Gen. Azubuike Ihejirika, blamed the porous borders for the growing insurgency in the North-east. Experts have long since warned about the danger posed by the assorted illegal weapons that are being smuggled through the borders by merchants and terrorists.

Yet, very little has been done to address the question of security at the country’s borders.
In the last couple of years, the federal government has from time to time closed the country’s borders with its West African neighbours to try to control the entry and exit of people and goods. The government has also adopted diplomatic strategies to encourage regional cooperation on the issue of security at the national borders. These measures are valid and necessary. But the federal government needs to up the ante in its efforts to secure the country’s international land borders of about 4,470 kilometres (2,513 miles) with Chad, Cameroon, Benin, and Niger, and coastline of 774 kilometres (480 miles).

Former Minister of Interior, Mr. Abba Moro, said in May 2013 that Nigeria needed $244 million to install electronic surveillance systems round its borders. He stated that the United States State Department and a Chinese firm had offered to assist in the project, stressing that the borders would be effectively policed when the project is completed. It is unclear how far the federal government has gone on the electronic surveillance project.

But on Monday in Sokoto, Danbazzau said the federal government planned to deploy modern methods and machines as well as intelligence to monitor movements along the country’s borders. This is to try to stop the smuggling of arms, drugs and human trafficking.
Some have also suggested the walling of Nigeria’s borders.

The federal government must decide on the appropriate and realistic criteria to adopt in policing the borders. Nigeria can afford the hi-tech remedies to its border security problem, and it can also employ adequate manpower to secure the borders. What the country cannot afford is the seeming lip service being paid to the menace of porous borders. The relevant authorities have regularly highlighted the need to adequately police the borders, without concrete steps to achieve the goal.

The country’s location in a relatively unstable region, with volatile socio-political situations in countries like Ivory Coast, Chad, Mali, etc., makes the need for proper border security urgent. There is also the question of growing poverty in many of the countries bordering Nigeria, which makes their nationals susceptible to manipulation or intimidation by terrorists.

Since 2009 when Boko Haram insurgency put down roots in the North-east, places outside the Nigeria have been used as launching points for terrorist activities in the country. Such outposts have also provided a buffer for fleeing terrorists. Thousands of people have been killed and the economies of states and regions have been destroyed.

Trillions of naira has been sunk into the fight against insurgency. But the anti-insurgency efforts may come to nought if urgent steps are not taken to fix the border security problem and block routes that have for years served as incubator for terrorism in Nigeria.