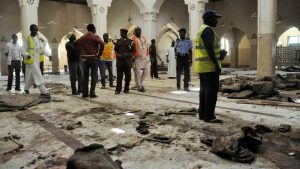 A suicide bomber entered a mosque in a northern Nigerian town and detonated his explosives, killing at least 10 people during early morning prayers, like reported by ap.org.

Bukar Jibril, a youth volunteer in Gamboru Ngala town, says nine bodies were found immediately after the blast and two other people died later, including the bomber.

The Borno state government on Tuesday tightened a curfew and increased security checks around its capital, Maiduguri, after a resurgence of violence in the city where Islamic extremist group Boko Haram was formed.