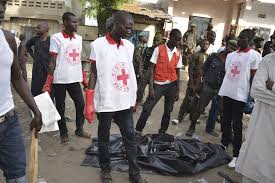 Two suicide bombings at a mosque on the outskirts of Maiduguri in northeastern Nigeria killed at least 30 people, the National Emergency Management Agency said.

The first blast occurred on Thursday in the mosque at Mulai during evening prayers and the second after residents rushed to the scene to help victims, Mohammed Kanar, the coordinator of the agency, said by phone on Friday.

“We are still compiling the figures of the injured though we identified seven in a critical condition,” Kanar said.