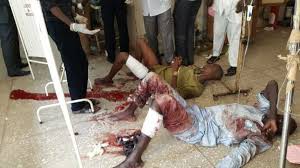 According to the residents of the town, three suicide bombers were on the prowl at Sajeri area of the town at about 8:30p.m., detonating explosive devices strapped on them.

Sajeri, a highly populated area in the troubled town has become endangered as about two weeks ago, four female suicide bombers invaded the area killing over 50 persons and injuring more than 20 others.

In yesterday’s attack, an eyewitness, Ibrahim Abdullahi, told THISDAY on phone that “I just left the area where the explosion happened when I heard three loud bang that shook the entire area.

“Curiosity made me to return to see if some of the people I left at the vicinities were not killed in the explosion, but when I got there I saw at least seven corpses been evacuated and dozens of injured were been assisted.

Abdullahi said: “I cannot tell if they are female or male suicide bombers for now, but the youth vigilante members and soldiers were involved in evacuating the corpses.”

He noted that the three explosions were few metres away from each other, adding that many people were still in fear in the area believing that there could be another explosion.

A member of the youth vigilante group who spoke anonymously to our correspondent on phone, revealed that both the dead and the injured were taken to the General Hospital to be attended to.
However, no official confirmation of the incident could be obtained at the time of filing this report.