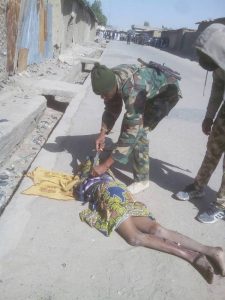 Soldiers in Gamboru-Ngala village of Borno State averted a major disaster when they intercepted and killed two suspected female suicide bombers. The suspects were trying to invade the community with explosives strapped on their bodies, the army said according to premiumtimesng.com.

A third teenage girl who probably opted out of the deadly mission was later arrested after she had un-strapped and dumped her explosive belt.

The arrested teenager said she and the two killed set out on a journey at 3.30 a.m. shortly after their Boko Haram leaders had primed them to carry out attacks in Gamboru village, the army said.

The spokesperson of Operation Lafiya Dole military command and control centre, Maiduguri, Onyema Nwachukwu, said the explosives could have caused many deaths had the troops not intercepted the girls.

Tuesday’s incident comes barely a week after three suicide bombers attacked a mosque in the same community during which about a dozen worshippers, including the father to one of the suicide bombers, were killed.

“Troops of Operation Lafiya Dole deployed around Gamboru Ngala have successfully averted what would have been a major devastating suicide attack carried out by three female Boko Haram terrorists against innocent citizens in Gamboru town in Gamboru Ngala Local Government Area of Borno State in the early hours of Tuesday”, Mr. Nwachukwu, a deputy director, army public relations said in a statement issued to PREMIUM TIMES at midnight.

“Two of the suicide bombers, strapped with suicide vests had attempted infiltrating Gamboru town at about 6.45 a.m. when they were sighted by a joint patrol team of vigilant troops and Civilian JTF at Unguwar Yobe area shortly before entering the town.

“They were immediately neutralised (killed) by the troops, while the Explosive Ordnance Disposal Team (EOD) safely unstrapped and detonated the suicide vests.

“A third female suicide bomber was detected and intercepted within the same general area and subsequently confessed to the joint patrol that she and the other two terrorists had been dispatched at about 3.30 am on Tuesday to unleash mayhem on Gamboru town. She also revealed the location she had hid her suicide vest and led the troops to recover it.

“The recovered vests and the surviving suicide bomber have been taken into custody for further interrogations. We call on the general public to be more alert and vigilant, while going about their daily activities in their various communities to detect suspicious persons and inform the security agencies accordingly.”

This incident occurred after four soldiers of the Nigeria army lost their lives during a shootout between soldiers and Boko Haram insurgents on the islands of Lake Chad.

A large cache of high calibre arms and ammunitions were recovered from the scene.