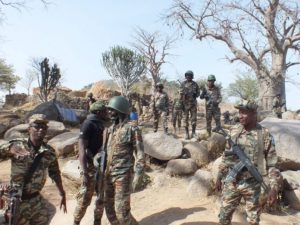 The Nigerian Army at the weekend said its troops had killed two Boko Haram insurgents at Mayanti village of Bama Local Government Council of Borno State, like reported by thisdaylive.com.

The Deputy Director, Army Public Rations, 7 Division, Kingsley Samuel, told the News Agency of Nigeria (NAN) in Maiduguri the troops had ambushed a group of insurgents while trying to cross into the Sambisa Forest.

He explained that the troops neutralised two insurgents while many others escaped with gunshot wounds, adding that some food items were also recovered from the insurgents.

“The Mobile Strike Teams (MSTs) of Operation LAFIYA DOLE resolve to rout out the remnants of Boko Haram terrorists.

“MST yielded yet another result with the troops successfully ambushed unsuspecting terrorists at about 10:45p.m. on Friday, October 6, 2017.

“The insurgents were attempting to cross into Sambisa Forest from Mayanti village in Bama Local Government Area of Borno State.

“The troops sprung the ambush on the terrorists and neutralised two of them, while several others escaped with gunshot wounds. The troops also recovered two bags of maize from the ambush site.

“The MST has been a potent deadly mobile lethal force engaging and neutralising the insurgents in several staging areas.”