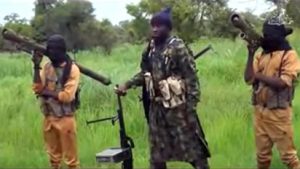 At least six people were killed when suspected Boko Haram fighters attacked a town in northeast Nigeria, in the latest attack against vulnerable, isolated rural communities, the local government said like reported by vanguardngr.com.

Bukar Wakil Tawu, secretary of the Magumeri local government area, said about 20 people believed to be from the jihadist group attacked Jaddannam at about 9:00 pm (2000 GMT) on Friday.

“They killed six people and burnt almost the whole town. They also burnt livestock and food supplies from recent harvests,” he told AFP from the Borno state capital, Maiduguri, nearly 50 kilometres (30 miles) away. “I went to the town yesterday (Sunday), where I met the poor residents. They are peasants who rely on subsistence farming and their livestock. “They have now lost all their belongings. We are appealing to the government to come to their aid and for patrols to be intensified because the area is remote and it has relatively huge population.” Eight years of conflict have left at least 20,000 people dead and more than 2.6 million homeless in northeast Nigeria but has also devastated infrastructure, including telecommunications, leaving communities virtually cut off.

Local residents had to travel to Maiduguri to report the attack. Recent weeks have seen an increase in Boko Haram activity in northeast Nigeria and the Far North region of neighbouring Cameroon after the end of the rainy season in September. At least 20 people were killed in a series of raids and suicide bomb attacks in the space of a few days last month, while civilians were also killed when their vehicles hit landmines planted by the Islamists.

Those deaths — and the latest in Jaddannam — underline the continued threat posed by Boko Haram, despite claims from the military and the government that the insurgency is nearing an end. Boko Haram fighters loyal to factional leader Abu Mus’ab al-Barnawi have been known to operate in the Magumeri area. In July, 19 soldiers and 33 militia members were among 69 killed when Boko Haram ambushed a heavily-armed convoy of oil exploration workers.