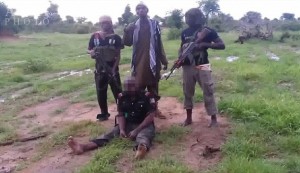 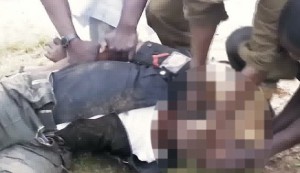 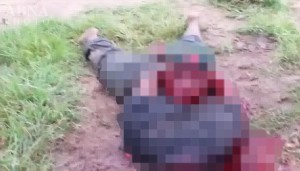 Depraved Boko Haram “extremists” have released a shocking new video of a uniformed man – believed to be a police officer – being handcuffed, held at gunpoint and beheaded.

The footage – released by terrorist operating in the north of Nigeria – also shows militants attacking an army barracks.

It emerged as 178 hostages kidnapped by the terror group were freed in Borno – the heartland of the insurgency.

The disturbing eight-minute video clip, shared on social media, is recorded in a similar style to barbaric videos released by ISIS over the last year.

In March last year ISIS accepted a pledge of allegiance from Boko Haram, who have been responsible for killing more than 10,000 people in Nigeria.

The video shows intense firefights in the day and night time on army barracks in Borno and Yobe.

The extremists are filmed carrying AK-47s and are backed up by tanks and heavy weaponry.

he footage cuts to a scene with a man dressed in uniform – believed to be a policeman – who is then held down and beheaded by three jihadis.

An unidentified fighter, shown in the video with looted army weapons and ammunition, and an ISIS flag, said the footage shows Nigeria’s military has not forced Boko Haram from its positions and got them hemmed into the Sambisa Forest, as the military has claimed.

On Sunday, the Nigerian army said it had freed 178 of the terror group’s captives – 101 of which are children, and 67 women.

It also claimed a Boko Haram commander had been captured and several militant camps were cleared around the town of Bama, about 45 miles south-east of the state capital Maiduguri.

Sunday’s rescue came after several attacks by Boko Haram in recent days. Thirteen people were killed in an assault on Malari village about 20 kilometres from Maiduguri.

The terror group has increasingly expanded its operations into neighbouring countries in recent months, prompting Nigeria, Cameroon, Chad and Niger to launch a coordinated military fightback.

The four countries, along with Benin, are preparing to launch a new 8,700-strong force that officials say will go into action soon.

‘The multinational joint force will eradicate… the blind terrorism of Boko Haram,’ Niger’s President Mahamadou Issoufou said in a televised speech on Sunday.

The jihadi group has stepped up its attacks since Nigeria’s new President took office in May, unleashing a wave of violence that has claimed 800 lives in just two months.