You are here: Home / Africa / Nigeria: several dead as suicide bomber blows self up in Maiduguri mosque 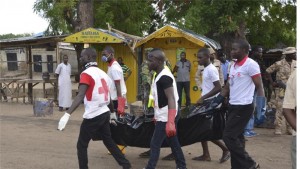 A Boko Haram bomber has reportedly attacked a group of Muslims having their early morning prayers at a mosque opposite the University of Maiduguri, like reported by sunnewsonline.com.

the male suicide bomber reportedly entered the mosque, located in Dalori quarters, opposite the university, and detonated the improvised explosive device while the congregation observed their prayers.

The report said an unspecified number of people were killed in the attack which was confirmed by the spokesperson of the National Emergency Management Agency (NEMA), Sani Datti.

In the words of Datti, “There was a reported case of explosions at Dalori quarters, Maiduguri, Borno State. Our Search and Rescue officers are already on their way to the scene, detail later.”