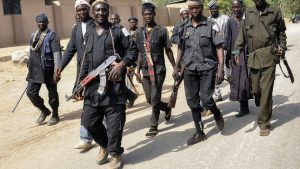 Boko Haram militants have killed more than 20 000 people and displaced more than 2 million others in north east Nigeria since 2009.

At the height of its activities between 2009 and 2015, the insurgents attacked a range of targets leaving death and destruction in their wake. These include churches, mosques, schools, universities, markets, police stations and even military installations.  They bombed locations, attacked with guns, raped women, killed children, took hostages and occupied territories.

The militants left government and its security forces looking powerless and people in the region helpless. No place was safe.

Under siege, communities in the north east were faced with three options. They could flee, join the insurgents, or risk being killed. Many took the first option and fled to safer destinations. Those who stayed were compelled to either join Boko Haram or risk being slaughtered.

But a fourth option emerged – self defence. People began to organise into emergency community vanguards to defend themselves. Community vigilante movements were born in several communities across the region.

One of the first Civilian Joint Task Force was formed in early 2013 in Adamawa State in north east Nigeria. It was made up of community vigilante formations, including neighbourhood guards and hunters guilds. The task force carries out community policing through reconnaissance. The members watch over the community and accost any strange or suspicious people that enter. They operate in cells and carry a combination of traditional and modern weapons. They mount road blocks, conduct area patrols, mount guards at entry points and borderlines of their communities.

Generally, the involvement of vigilantes in counter-insurgency operations in Nigeria has been a subject of contentious debate. It’s apparent that they have contributed to improving security for some communities. But there are also concerns that in the long run they could pose a threat given their heavy-handed approach. Examples include extra-judicial killings, violation of human rights, extortion and criminal impunity.

What they have done

The vigilante groups are based on three models. The first is communal neighbourhood guards, the second the village hunters’ guild, and the third is the government recognised Civilian Joint Task Force. Communal neighbourhood guards are village based vigilante outfits dedicated to community defence. Hunter’s guild is the vanguard of traditional hunters and warriors that intervenes to reinforce the operation.

Since their emergence, vigilantes have contributed a great deal in the fight against the Boko Haram insurgency. They have reinforced and complemented the efforts of Nigeria’s Armed Forces, particularly in the areas of grassroots reconnaissance and intelligence.

Their cooperation and partnership with the military contributed to the finding of the first abducted Chibok Girl to escape from the militants in May 2016.

Despite their laudable achievements, there are legitimate concerns about the activities of vigilante groups. These include fears that their unguarded deployment could be counter-productive in the long run.

While they may be important in the short term in disrupting Boko Haram activities and serving as local partners in a successful counter terrorism strategy, arming militias is not a long-term policy. This is particularly true if unintended consequences are to be avoided.

Already there have been allegations of forced recruiting, child and woman soldiering and extra-judicial killings of suspected insurgents. In addition, there are fears that the vigilantes could degenerate and proliferate into mercenary militias.

But that’s not all. Vigilante activities often give rise to reprisal attacks on communities by the insurgents. The loose organisational and leadership structure of vigilante groups makes them susceptible to infiltration and internal sabotage.

The government and military have acknowledged the apparent successes of volunteer vigilantes in the fight against Boko Haram. But critics contend that vigilantes operate illegally, and argue that giving them a front line role in counter-insurgency operations implies that the state is abdicating its primary responsibility of ensuring sustainable national security.

Despite these misgivings, the justification for the vigilante approach to counter-insurgency can’t be disputed.  Vigilante groups are uniquely poised to contribute to local security for a number of reasons. These include the fact that they are formed in response to specific issues and conditions. They are staffed by local volunteers who have knowledge of the area and trust of the local community.

So what should be done?

If vigilantes are going to continue in counter-insurgency operations in a way that’s fruitful and sustainable they must operate within the law and established rules of engagements. Their activities must be properly regulated and coordinated through legal and institutional procedures to prevent impunity and other excesses.

The government can institute policy and institutional mechanisms that absorbs the groups into community policing systems, existing paramilitary structures or institutionalise them into a national reserve force dedicated to emergency mobilisation.

These measures would optimise the gains made and help manage abuses inherent in vigilante operations.