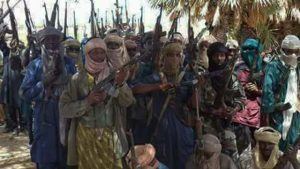 The attack comes just days after Niger State Governor, Abubakar Bello confirmed the activity of Boko Haram militants in the state.Unknown gunmen have kidnapped over 100 people in Shadadi town in Niger state, killing 8 and leaving 4 injured, like reported by niyitabiti.net.

A source who spoke with BBC Hausa said more than 1, 000 gunmen attacked the town on Wednesday and perpetrated the act.The attack comes just days after Niger State Governor, Abubakar Bello confirmed the activity of Boko Haram militants in the state.

The worst place affected by the latest attack is Shadadi town under Mariga Local Government Area where eyewitnesses said thousands of residents have fled the town after the incident.

According to some residents, people who were killed and kidnapped from Wednesday’s attack are up to 100 but the state government said those who were kidnapped are lesser than that.

An eyewitness from another town said the gunmen had arrived in large numbers and started shooting sporadically at the people, killing 8 people instantly while 4 persons sustained injuries.

The resident stated that most of the people in the town have now relocated to neighbouring towns including Kontagora.

The Niger State Commissioner For information, Sani Idris, who confirmed the incident to the BBC, said the number of those killed and kidnapped is not up to 100 as eyewitnesses claimed.

As of the time of filing this report, it is not clear if the attack was carried out by bandits or Boko Haram militants but both parties have yet to take responsibility for the attack.

The Niger State Governor recently said Boko Haram terrorists hoisted their flag in a part of the state.

The governor said the insurgents also forcibly took the wives of some of the villagers for themselves.

“Their wives have been seized from them and forcefully attached to Boko Haram members. I just heard that they have placed their flags at Kaure, meaning they have taken over the territory.

“This is what I have been engaging the federal government on, unfortunately, it has now got to this level. If care is not taken, even Abuja is not safe.

“We have been saying this for too long. All our efforts have been in vain,” the governor said.

Bello said the terrorists were trying to turn Niger into another Borno State, which has been their base for some time.

“This is the time to act. All hands must be on deck, it is not a fight for Niger state alone,” he said.

The governor however vowed to “take action”, saying he would no longer wait for anybody.