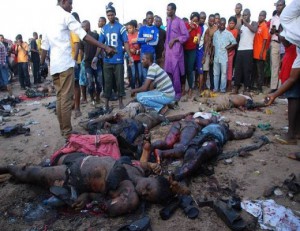 Two separate bomb blasts at a market in the Madagali area of Adamawa State killed over 56 persons while also leaving at least 177 others critically injured.

Chairman of Madagali Council, Yusuf Mohammed, while also acknowledging the tragedy, said the blast occurred in the early hours of Friday.

According to him, the attack also destroyed food items worth several millions of naira aside from the lives lost.

Badare while explaining how the incident happened, said, “The attack was carried out by two female school children, they detonated two bombs at the same time killing the victims while they also died in the process. We have reinforced security in the area to avoid enemies coming in to cause further mayhem.”

Police Public Relations Officer in Adamawa State, Othman Abubakar, said they were on top of the situation as their men were deployed to secure the area.

The Director, Defence Information, Brig.-Gen. Rabe Abubakar, told one of our correspondents that the attack was caused by desperation of the Boko Haram insurgents. He said the group had become weak and had decided to use “sleeper cell” to carry out attacks on citizens.

Meanwhile, President Muhammadu Buhari on Friday condoled the families of victims of the tragedy.

In a statement by his Senior Special Assistant on Media and Publicity, Garba Shehu, the President also condoled  with the government and people of the state over the unfortunate incident.