You are here: Home / Africa / Nigeria: more than 800 hostages freed from Boko Haram 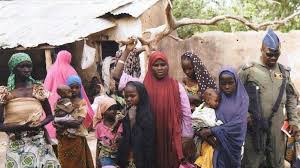 More than 800 hostages have been freed from Boko Haram, the Nigerian army said.

The military launched operations at the same time in various sites in Borno state, freeing 520 in Kusumma village and another 309 prisoners from 11 other locations.

It has been hailed as a significant success in the fight against the terrorist insurgents who have taken over large parts of northern Nigeria and sowed devastation across communities.

‘The gallant troops cleared the remnants of the Boko Haram terrorists hibernating in Kala Balge general area,’ army spokesman Sani Usman said in a statement. He added that 22 terrorists died in the operation.

As the military rescued the hostages, another 16 women were taken prisoner by the terrorist group, including two girls.

Thousands of people have been killed by the group, whose name means ‘Western Education is Forbidden’.

The fighters want a separate Muslim state under Shariah law.