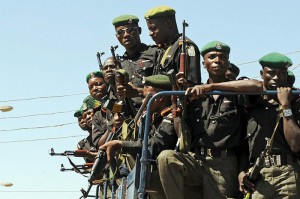 A pro-government vigilante and a security source had earlier said troops pulled back from the Sambisa forest after three vigilantes were killed driving over an anti-vehicle mine.

“It’s not true that our troops are retreating, in fact we are still marching forward in Sambisa. Our troops are still in there,” Defence spokesman Major General Chris Olukolade said by telephone.

Earlier, a soldier who asked not to be named said: “The soldiers have retreated to Bama because of mines. They had been on the road but that made them vulnerable, so they moved to the bush but there are mines planted there (too).”

The Sambisa forest, a former colonial game reserve, is about 100 km (60 miles) from the village of Chibok, from where Boko Haram abducted more than 200 secondary schoolgirls a year ago.

Intelligence officials believed they were being held in the forest, but US reconnaissance drones failed to locate them.

“Three of our boys were killed by a landmine as we progressed into Sambisa. We’ve suspended going farther,” Muhammad Mungonu, told Reuters.

The militants controlled an area the size of Belgium at the start of the year, but have since lost much of that ground after a concerted push by troops from Nigeria and neighbours Chad, Niger and Cameroon in the past two months.

A Chadian military source said a joint military operation involving forces from Niger and Cameroon was expected to begin to encircle the Sambisa forest next week. Chadian troops will go in from the Cameroonian border, where they have been massing.

Over the last six years, Boko Haram have killed thousands and kidnapped hundreds in a battle to establish an Islamic caliphate.
President Goodluck Jonathan’s failure to crush the Islamists contributed to his defeat in Nigeria’s March 28 election.