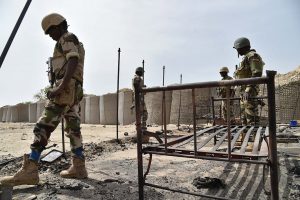 The raids, which were supported by Air Task Force (ATF), resulted in the bombardment of the insurgents’ hideouts on April 6, 2020.

“Today’s (Monday) engagement was a coordinated air and ground operation. After an intensive firefight, 19 Boko Haram terrorists were neutralised, while others fled towards the Lake Chad.”

He added that the troops destroyed two gun trucks and captured two more suspects during the duel.

“Four motorcycles as well as arms and ammunition were also recovered,” Antigha further said, noting that the task force did not record any causality.

However, the sect on Monday evening attacked Kirchinga village in Madagali Local Council of Adamawa State.

The terrorists stormed the community at about 4:00pm, burning homes and looting shops.

Though later repelled by the Nigerian Army, the Boko Haram fighters also shot an octogenarian in the leg.

A local source told The Guardian that the attackers, on arrival, shot sporadically into the air, apparently to scare residents away for their seamless expedition until the intervention of the military.

A villager said: “The devastation would have been worse but for the timely response of the soldiers stationed in Kirchinga.”

Commander of the troops in Madagali, Colonel Abdulsalam, confirmed the attack and its foiling.

Besides, the Peoples Democratic Party (PDP) has called on President Muhammadu Buhari to confirm reports that Chadian President Idris Deby personally led his troops to rout the insurgents and free Nigerian territories and soldiers seized by them in Borno State.

The main opposition political grouping said its call was predicated on the fact that “this development is already triggering questions among Nigerians regarding the commitment and capacity of Mr. President, as Commander-in-Chief, to lead the fight against insurgency in our country.”

In a statement by its National Publicity Secretary, Kola Ologbondiyan, PDP said it is was “worried that the silence of President Buhari who, as Commander-in-Chief, had promised to lead from the front, is ominous and has opened our security apparatchik to a plethora of innuendos, claims and counter-claims in the public space.”

Ologbondiyan added: “Our party is worried that Mr. President has chosen silence at a time, when again, he needs to stand up and take action to assure our citizens of their safety as well as efforts being made by his administration against the insurgents.”