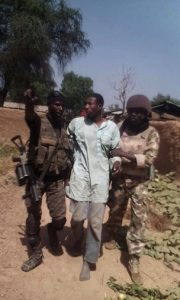 The coordinator, Defence Media Operations, Maj.-Gen. John Enenche, disclosed this while giving updates on military operations across the country on Thursday in Abuja.

Enenche said the suspect who is a Nigerien national, was arrested by troops at a location close to an Internally Displaced Persons (IDPs) camp in Diffa Region of Niger Republic on October 3.

Enenche said that while the Military High Command has commended the troops for their gallantry, it also encouraged the people to continue to avail the troops with information that would assist them in their operation.

According to him, the gallant troops have continued to dominate the general areas with clearance patrols, aggressive fighting and confidence-building patrols.

“Troops are further encouraged to remain determined and sustain the tempo in curtailing the activities of terrorists, armed bandits and other criminals.

“The High Command of the Armed Forces also reassures the general public of its unwavering commitment to securing the country for all human activities to strive.

“Members of the general public are requested to continue providing timely information on the activities of criminals in their various localities to the nearest military and other security agencies location for prompt action,” he said