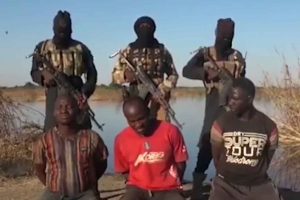 Three villagers were also killed in a separate attack in Auno earlier that day.

The insurgents had accused the villagers of alerting troops about their movement on their way to rob traders in the nearby town of Ngamdu, he said.

Soldiers intercepted the jihadists and engaged them in a gun battle, forcing them to retreat, said militiaman Umar Ari, who gave the same death toll.

“They (ISWAP) attacked the village on their way back, accusing residents of informing soldiers about their movement to rob local traders at the weekly market”, Ari told AFP.

Earlier on Tuesday, ISWAP fighters slaughtered three farmers that they seized as they worked on their fields outside Auno village, 65 kilometers away, the militia leaders added.

ISWAP, which split from Boko Haram in 2016 and initially focused on attacking the military, has increasingly been targeting civilians, in particular abducting and killing motorists at bogus checkpoints on highways.

Meanwhile, eight people were injured late Tuesday when gunmen from a rival Boko Haram faction ambushed a civilian convoy under military escort outside the town of Banki near the border with Cameroon, security sources told AFP.

“Four of the victims were taken to a hospital in Mora on the Cameroonian side because of the severity of their injuries,” said a security source, who asked not to be identified.

The decade-old jihadist insurgency in mainly-Muslim northern Nigeria has claimed 36,000 lives and forced two million others to flee their homes.

The conflict has spilled over to Cameroon, Chad and Niger, prompting a regional military force to be formed to fight off the insurgents.