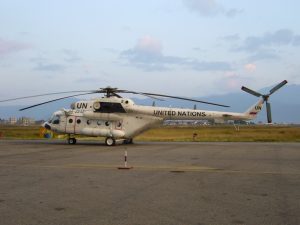 Islamic extremists opened fire on a U.N. aid helicopter in northeastern Nigeria over the weekend, killing two civilians in an escalation of hostilities in the long troubled region, like reported by abcnews.go.com.

President Muhammadu Buhari blamed the attack on militants linked to the extremist group Boko Haram, and warned Sunday evening it “would not go without severe consequences.”

“Boko Haram terrorists are clearly on the back foot and their increasing attacks on innocent civilians, including U.N. humanitarian workers, is part of their desperation to prove that they are strong in order to cover up their dwindling fortunes,” the president said in a statement.

Security has long been a concern for aid groups operating in northeastern Nigeria, where humanitarian workers have been been kidnapped and killed amid Boko Haram’s decade-long insurgency.

There was no immediate claim of responsibility for the Saturday attack, though it comes not long after a splinter faction of Boko Haram warned civilians that they could be targeted if they helped humanitarian groups or the military. The splinter group previously was not known to target Muslim civilians as part of its insurgency against the government.

Edward Kallon, the U.N.’s humanitarian coordinator in Nigeria, said the victims included a 5-year-old child. The crew members were not hurt and there were no aid workers on board when bullets hit the helicopter in Borno state.

“The U.N. Humanitarian Air Service is essential to evacuate wounded civilians and remains the backbone to facilitating humanitarian access,” he said.

Some 1.9 million people have been displaced by the jihadist violence in northeastern Nigeria, and the U.N. World Food Program is now warning that a total of 3 million people are facing hunger.