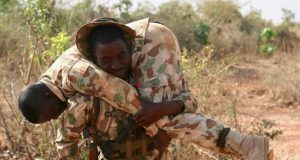 At least nine Nigerian troops were killed in an offensive by jihadists in northeast Borno state, two security sources said according to thedefensepost.com.

Fighters from the so-called Islamic State West Africa Province (ISWAP) in 10 trucks fitted with machine guns overran a military position in the town of Magumeri late on Tuesday, killing nine troops, they said.

“The terrorists took over the (military) post around 4:00 pm (1500 GMT) and dispersed the troops, killing nine,” the first source told AFP.

The militants burnt three vehicles at the base, including an armored tank and an excavator used in digging fortifications to stave off jihadist incursions, said the second source who gave the same toll.

A military reinforcement from the regional capital Maiduguri engaged the retreating attackers in a fight and killed 20 insurgents, the sources said.

In a statement late Wednesday, ISWAP claimed responsibility for the Magumeri attack where it said 10 soldiers were killed, with weapons and vehicles seized.

The militants also claimed to have killed a similar number in another offensive against Nigerian troops near the fishing town of Baga on the Lake Chad area, according to the statement.

ISWAP have repeatedly attacked Magumeri in recent days, burning a clinic and local administration building as well as robbing residents of phones, money, and personal effects.

Troops have been deployed to protect the town after residents began to flee to escape the insurgents.

The decade-old conflict which started in 2009 has killed 36,000 people and displaced around two million from their homes.

The violence has spread to neighboring Niger, Chad, and Cameroon, prompting the formation of a regional military coalition to fight the jihadists.