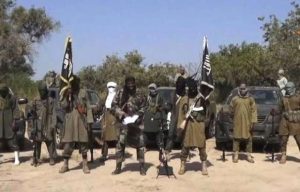 Reports reaching DAILY POST from Maiduguri, the Borno state capital said, Boko Haram terrorists have invaded Korongilim village near Chibok local government area of the state, where they burnt down all the houses in the village, like reported by dailypost.ng .

According to him, the terrorists were on their way to attack the village when their vehicles stuck in the mud. In the process of pulling their vehicles out, a heavy gunfire went off, which put the village on alert and they fled their homes.

“By the time terrorists eventually came to attack, nobody was around and they burnt the whole village. Soldiers arrived, but by then the terrorists wreaked havoc and left.

“All the villagers dispersed and displaced with their houses burnt needs urgent help particularly in this rainy seaon. Thank God, no death was reported,” he added.