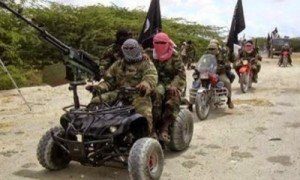 Intelligence report coming from security sources in Maiduguri, the Borno state capital revealed that, about seven Hilux trucks and 40 motorcycles conveying the dreaded Islamic militants, Boko Haram, were seen last night heading to Yakku and Afari villages; about 30 kilometers away from Magumeri local government area, where the sect attacked last week, like reported by dailypost.ng .

The information, which was conveyed to security sources on Wednesday by locals in the area suggested that, such clandestine gathering by Boko Haram always suggest a heavy onslaughts on Villages and Community targeted by the insurgence.

According to the information, there is every likelihood that, the Boko Haram militants are preparing to attack another town within the vicinity of Gubio or Gajiram or any settlement around the area of the northern Borno as their movement suggested.

” They may not be looking for a place to hibernate,” a security source told our correspondent, ” it is their own style of unleashing terror, but there is good preparation and our men are on their trail already,” our source said.

Asked if the military is well prepared to engage them where they are being sighted, he added that, ” We are gathering information on their movement. There is another information that some of them were sighted gathering at Kawiya Kulo Ngudiye area of Jakana town in Kaga local government area. Precisely, about 8 kilometers away from Jakana, but the troops cannot engage them just like that, without adequate information as regards innocent victims they always use as human shield,” he said.

He said, troops are also being mobilized to secure most of the villages and communities the militants are likely to attack.