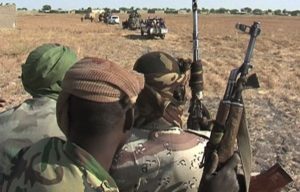 “Boko Haram has proven to be a resilient group…I think it will take time to totally eliminate,” said Muhammad Ibn Chambas, special envoy to the UN secretary general for West Africa and the Sahel.

“What we are seeing is that Boko Haram has become part of an international terrorism network.”

Chambas was speaking on the sidelines of a Lake Chad regional summit in Maiduguri, the capital of Borno state and birthplace of Boko Haram.

Governors from four countries straddling the lake – Nigeria, Niger, Chad, Cameroon – are meeting for two days to discuss regional cooperation on stabilisation, peace building and sustainable development in the area.

His remarks come at a time the Nigerian government and military is insisting that the war against Boko Haram is over, despite a recent spate of attacks by the extremists.

On 1 May, at least 86 people were killed in twin suicide attacks targetting a mosque and a nearby market in the town of Mubi in Adamawa state.

Chambas said that the Islamist insurgents were likely still holding on to territory in the region.

“It is relative,” he said in response to reports that Boko Haram was holding territory in the northeast states of Yobe and Borno.

“As long as they are not totally defeated, obviously they are present in some areas”.

The Islamist insurgency has killed at least 20,000 people in nine years of violence that has spilled from northeast Nigeria into Niger, Chad and Cameroon, creating a dire humanitarian crisis.

The four countries formed the Multinational Joint Task Force (MNJTF) to fight the Islamic extremists who criss-cross the porous borders in the remote region.

Chambas commended the MNJTF counter terrorism fight as “appreciably successful” but warned it was far from over.

“We of course ask that the MNJTF remains vigilant in its fight against Boko Haram, we cannot take it for granted and assume they have been totally defeated”.

In December 2015, President Muhammadu Buhari declared Boko Haram had been “technically defeated” after reclaiming swathes of territory back from the jihadists.