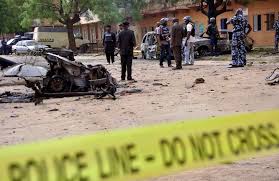 Boko Haram suicide bombers killed 12 people and injured 48 others in an attack on Wednesday on the northeastern Nigerian city of Maiduguri, officials from the State Emergency Management Agency (SEMA) for Borno said.

In recent weeks, Nigeria’s military has embarked on an offensive against the Islamist insurgency in the northeastern state of Borno, the epicenter for much of the conflict, which began in 2009.

That has not stopped Boko Haram’s attacks, which target both civilians and the military.

Two bombers struck a market in the Muna Garage area on the outskirts of Maiduguri late on Wednesday afternoon, the SEMA officials said.

Muna Garage is the site of a camp for displaced people and a frequent target of Boko Haram attacks.

In the wake of the attack, the smell of burned blood lingered while parts of the market were still ablaze, according to a Reuters witness.

On Monday, a Boko Haram faction released a video purporting to show some of the girls kidnapped from the town of Chibok nearly four years ago, as well as a downed Nigerian military aircraft and a group of policewomen abducted last year.