You are here: Home / Africa / Nigeria: Islamist Boko Haram militant razed down community near Maiduguri, killing 3 and wounding 7 others 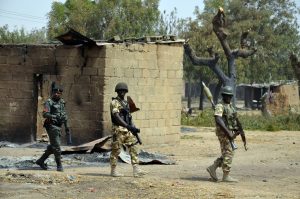 At least three persons were killed and seven other injured when Boko haram terrorists burnt down a community on the outskirts of Maiduguri Borno state last night, local vigilantes said. A dozen of terrorists stormed Koffa, some of 5 kilometers from Maiduguri at about 2000hrs started shooting and later razing down 57 homes, like reported by saharareporters.com.

According to vigilante source, the operations lasted for an hour before Nigerian troops started arriving the village. “They came around 8 pm last night, on their arrival they opened fire on us, we ran into the bushes, unfortunately, three elderly persons were burnt to death and seven persons sustained gunshots wounds.”
Another survivor Saminu Abba said they went away with foodstuffs and livestock before they set their homes ablaze.

“Just yesterday, we heard on the radio that Boko Haram has been defeated, just less than  2 hours later they killed our people, burnt down 57 homes and many were injured. It is saddening.” Abba said.

It would be recalled that 3 days ago Theater Commander Operation Lafiya Dole, Maj. Gen. Rogers Nicolas announced that Boko Haram terrorists have been completely defeated in the northeast.