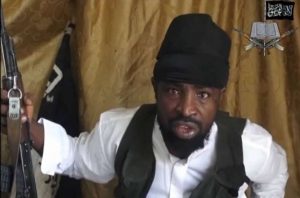 Boko Haram leader, Abubakar Shekau, on Tuesday released a new video, claiming responsibility for a number of attacks in North East Nigeria during the festive season, like reported by dailypost.ng.

It is Shekau’s video in many months, amid claims from the Nigerian government, that the insurgent group has been defeated.

“We are in good health and nothing has happened to us,” Shekau said in the 31-minute video message spoken in the Hausa language.

“Nigerian troops, police and those creating mischief against us can’t do anything against us, and you will gain nothing.

The video then shows footage from a Christmas Day attack on a military checkpoint in Molai village on the outskirts of the northeast Nigerian city of Maiduguri.

President Muhammadu Buhari stated in his New Year address, that Boko Haram has been “beaten”.