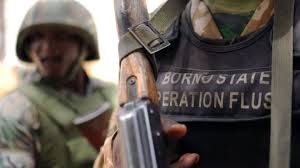 Many soldiers have been killed while others are missing following an
attack by Boko Haram insurgents on a Nigerian Army’s convoy in Gubio
Local Government Area of Borno State, local sources said according to saharareporters.com.

The incident happened Wednesday on the highway between Gubio and
Magumeri at 4:15 pm.

“The attackers laid ambush with an anti-aircraft gun and other
weapons. More than a dozen soldiers were killed in the attack while
several others sustained injuries,” Daily Trust quoted one of the
sources as saying.

A source added that the insurgents seized caches of weapons and
ammunition along with a utility vehicle belonging to the troops.