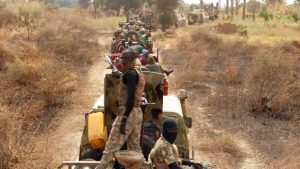 A large cache of arms, ammunition and military equipment were carted away by Boko Haram fighters during the attack on 157 Task Force Battalion in Metele, Abadam Local Government Area, at about 6:00 p.m., a setback for government forces trying to push terrorists further out of Nigeria’s northeastern flank.

There were fears for the fate of the troops from the base, which was raided only a month ago, as military sources said the Nigerian Army was making frantic efforts to contain the traumatic effect of the attack on the larger counterinsurgency operation.

Bodies of fallen troops were still being recovered and evacuated from the scene as of Tuesday morning, PREMIUM TIMES learnt. But dozens of soldiers from the battalion have already been confirmed killed, amongst them their commander. Military sources were unable to tell the number of Boko Haram casualties.

Military sources said the fallen commander was a lieutenant colonel, who had overseen the unit for a long time. He once allegedly refused to mobilise troops for an operation, citing unavailability of serviceable hardware, but faced threats of being court-martialed, sources said.

PREMIUM TIMES has decided to withhold the identity of the officer as it was not immediately clear his family had been informed of his death.

It was not immediately learnt how many soldiers were manning the base during the attack, which was linked to Islamic State in West Africa (ISWA).

The group has long targeted military bases, and has intensified its assaults in recent months on military formations across the volatile northeast.

A day before on November 17, Boko Haram terrorists attacked the base of Sector 2 troops in Mainok, Kaga Local Government Area, killing at least one soldier and leaving several others wounded. Military sources believed the Shekau faction of the group was responsible for the attack, which saw insurgents cart away a large quantity of arms and ammunition.

It was only on October 8 that Boko Haram militants raided the same base of 157 Battalion in Metele, killing at least 18 soldiers and wounding eight others, PREMIUM TIMES reported.

At least 157 soldiers were feared missing during the attack, and their whereabouts had not been conclusively resolved by military brass over a month later, sources said.

Military authorities announced the attack, but heavily downplayed its magnitude.

President Muhammadu Buhari and the Nigerian military leaders have claimed they are winning the war on terror, but analysts say recent attacks are bolstering rather than dampen fears of the insurgency.

“When you consider the frequency of these attacks since July, it is difficult to say that our military has the upper hand,” said security analyst Chris Ngwodo.

Mr Ngwodo said a possible failure on the part of the military leaders to appropriately fortify bases might be responsible for the audacious scope of the attacks.

“These bases are not sufficiently fortified to withstand insurgents’ attacks,” the analyst said. “That they are doing this regularly and getting away with it shows there is no adequate security in place even at the bases.”

“Every resource must be made available to fortify where soldiers are manning, even though many of them are forward operating bases,” Mr Ngwodo added. “Intelligence capabilities must be also be strengthened to anticipate things like this because the huge movement it takes for terrorists to carry out such attacks should have been detected.”

Hundreds of Nigerian troops have been killed and even more missing since Boko Haram resumed its latest campaign in July, fueling concerns amongst military leaders, and prompting an emergency reshuffling of commanders.

Worried about the rising cases of missing soldiers in Boko Haram attack, the chief of Army Staff, Tukur Buratai, issued a warning to troops on the battlefront against fleeing from insurgents in August, threatening errant personnel with a tough prosecution.

The Defence Headquarters announced last week it had taken new delivery of military equipment, boasting of a tough time ahead for insurgents.

The military has said it recorded tremendous gains in its counterinsurgency operations over the past three years, especially after managing to confine the insurgents to the fringes of Nigerian territories.

This was against the previous years when the deadly Boko Haram terrorists held vast Nigerian lands across its North-east stronghold, occasionally spilling into North-west and North-central geopolitical zones.