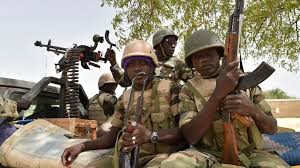 Details of the attack on the remote village, which were received yesterday further revealed that eleven persons were feared killed in the attack as against the seven members of the Civilian Joint Task earlier reported to have been killed in the Sunday’s siege.

Some residents of the village had told that seven members of the CJTF and local hunters who were part of the group that engaged the insurgents were killed.

Also in the early report, foodstuffs and livestock were said to have been carted away by the terrorist group who also abducted yet-to-be ascertained number of people, male and female.

It was also gathered that the engagement of the insurgents and vigilantes was on for over an hour.

Some of the residents of the village who spoke to journalists yesterday, said 11 men were killed in the siege.

They alleged that the insurgents attacked mourners in Takulashi village, barely 15 kilometres to the local government headquarters in Chibok town.

The villagers said the insurgents opened fire on the mourners targeting and killing 11 men, after which they picked out and abducted women that met their fancy.

The villagers said there was no military or police presence, adding that the vigilantes and the unarmed villagers were left at the mercy of better armed criminals.

Messages sent to both military or police authorities were not responded to as at the time of filing the report.