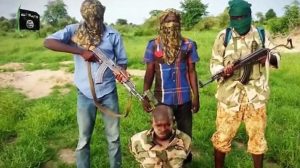 Boko Haram insurgents have killed scores of people in the last three days in Borno, like reported by dailypost.ng.

The Police Command on Monday announced that a high number of casualties was recorded after the sect attacked Malari, Guzamala Local Government Area.

The Commissioner for Police, Damian Chukwu, told journalists in Maiduguri that about 40 houses were burnt.

He said: “Boko Haram group attacked Malari village in Guzamala local government area at about 2000hrs three days ago, luckily enough our men engaged them but they fired RPG into the village and about 40 houses was torched.

“We have recorded some casualties but the details are not available now. I am sure if not for prompt actions by our men, they would have razed down the whole community”.

Also speaking, a local hunter disclosed that Boko Haram stormed the village in a convoy and shot sporadically at civilians.

“More than 20 persons were killed and many are still missing, they came in large numbers and rained bullets on the villagers.

“Many of them fled to Monguno town for safety but the deadly group looted food stuff before they set the community ablaze,” he said.