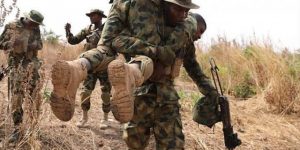 In what is being touted as a “coordinated ambush” by Nigerian officials, militants belonging to the West Africa-based, ISIS-affiliated terrorist organization Boko Haram on Sunday unleashed a donkey carting explosives to assail the convoy of Borno State Governor Babagana Zalum, like reported by foxnews.com.

Zalum was headed back to Maiduguri, the state capital, following a visit to meet hundreds of residents who had recently returned to what was left of their homes, having fled the violence and the terror outfit’s strict imposition of sharia law six years ago, according to the BBC.

Borno serves as the birthplace of the militant uprising, which began in 2009, but Zalum’s administration has been on a quest to encourage displaced residents – many of who have been living in squalid camps with scant aid – to return to their towns and villages.

Soldiers are reported to have spotted the lone animal, and sensing something was off, shot at it – igniting a flurry of explosions, and then prompting the Boko Haram operatives to come out of hiding and open fire in return.

No one inside the convoy, including Zalum, was wounded.

Two days earlier, the local official had also narrowly escaped an assassination attempt while en route to an area near Lake Chad. At least 18 were killed in that attack, including four civilians and 14 law enforcement officers.

But despite some battlefield successes to quell Boko Haram’s campaign of brutality – and the Nigerian president’s avowal last year that it had been “technically defeated” – the ISIS-linked group has continued to wreak havoc in the region.

The Boko Haram uprising – which centers on creating an Islamic state under Islamic law – has claimed the lives of over 30,000 since is was sparked just over a decade ago, and led to millions being forced to flee their homes.

The essence of the terror group’s barbarity was propelled into the public limelight in 2014 after it abducted 276 mostly Christian schoolgirls from the sleepy, northeast Nigerian town of Chibok, sparking a viral #bringbackourgirls activism campaign worldwide.

However, abduction, rape, forced conversions – and bomb-draped donkeys – are just a few of many terror tools used by Boko Haram, which means “Western education is forbidden.”

A report released in July by the United Nations Special Representative for Children and Armed Conflict depicted the ongoing and “gruesome violations against children” in Boko Haram’s main stronghold, which spans Nigeria and parts of Chad, Cameroon and Niger.

The report, which documented violations between January 2017 and December 2019, stressed that the recruitment and use of children accounted for the greatest number of verified violations, with a total of 3,601 boys and girls affected. Boko Haram was responsible for the recruitment and use of 1,385 children, mainly through abduction, used in direct hostilities, and in a variety of support roles, including as sexual slaves.

“One particular and especially despicable practice of Boko Haram was to use children, mainly girls, as carriers of personnel-borne improvised explosive devices,” the report added. “Also known as ‘human bombs.'”