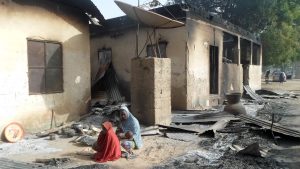 The Leadership Newspaper reported on Tuesday that the raid took place in Auno town on a major highway in Borno State, on Sunday saying most of the victims were travellers who were burnt to death while sleeping in their vehicles during an overnight stop, officials said.

In the publication, it was said the closure usually forced travellers and commuters to sleep over whenever the road was closed, to continue the journey the following morning when the road is opened by the military.

A source who survived the attack and who spoke on condition of anonymity told the publication that corpses were still being brought into Maiduguri to hospitals for identification.

The source said the Boko Haram terrorists abducted an undisclosed number of persons after killing and razing of vehicles.

“The insurgents abducted a number of women and children and killed not less than 30 people who are mostly motorists and destroyed 18 vehicles,” the source said.

Meanwhile, Borno State governor, Babagana Umara Zulum who visited the scene to assess the level of destruction and killings, called on the Army to create a unit in Auno to curtail further destruction of lives and property by the terrorists in Auno and the Maiduguri- Damaturu highway.

“We have made repeated call for the military to establish a unit in Auno. What the Army usually does is to close this gate by between 4:30pm to 5pm after which they will withdraw.”

“I have been briefed that over 30 persons lost their lives to this attack. So there is the need for the presence of soldiers permanently on this route,” the governor was quoted saying.