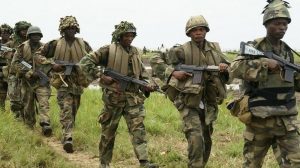 Men of the Nigerian Army are currently in a gun battle in Damboa area of Borno State with Boko Haram insurgents, according to saharareporters.com.

Residents, who spoke with TheCable, said the insurgents entered the community at about 6:30am on Wednesday and started shooting sporadically.

One of the residents said for over an hour, troops from the army’s 25 Task Force Brigade in Damboa had been exchanging gunfire with the insurgents.

“They came in plenty of hilux trucks. We saw about 20 before we started running towards the bush,” one of the fleeing residents said.

“They came in two batches. One came in through the North Sambisa and the other from Alagaruno.

“Soldiers from the 25 Task Force came in about 30 minutes and right now, over an hour, they are still exchanging gunshots with the insurgents,” the resident added.