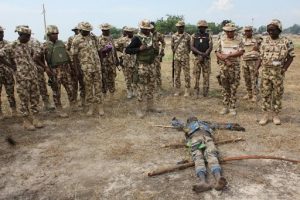 Jihadists killed seven soldiers in attacks in northeast Nigeria, including an assault on a town where schoolgirls were abducted en masse two years ago, military sources and residents said on Tuesday according to news24.com.

The attacks on Monday came days before the end of the Muslim holy month of Ramadan, when jihadists who have waged a 10-year insurgency usually ramp up their deadly assaults in the region.

In one assault on the town of Dapchi fighters believed to be from an Islamic State group affiliate killed one soldier and wounded three while looting shops and torching the house of a local leader, sources told AFP.

Dapchi was the scene of the abduction of more than 100 schoolgirls by the Islamic State West Afria Provine (ISWAP) in February 2018.

The girls were later released although the only Christian among them is still being held by the group after she reportedly refused to renounce her faith.

In a second attack on Monday near the village of Maza, fighters killed six soldiers after opening fire on a military convoy that had been hit by a landmine, two security personnel said.

The decade-long conflict in northeast Nigeria has claimed over 36 000 lives and displaced some two million people.

The jihadists have splintered into factions. In 2016, the Islamic State West Africa Province (ISWAP) broke from the main Boko Haram group, led by Abubakar Shekau.

In another incident on Monday, two female suicide bombers suspected to have been sent by Shekau’s loyalists killed two people in the town of Konduga, security sources and residents said.

The bombers sneaked into the town, 38km from regional capital Maiduguri and detonated their explosives as a government-backed anti-jihadist militia member was passing on a bicycle.

Jihadists also stormed the town village of Kautikeri and beheaded a local resident and abducted a herder along with 150 of his cattle, a local leader said.