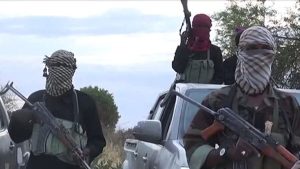 No fewer than 12 persons have been reported killed and several others injured by terrorists who attacked Ilela community in Safana Local Council of Katsina State, like reported by guardian.ng.

The incident, which occurred at the weekend, also saw several homes ransacked and burnt. It was learnt that the assailants stormed the community to counter a repentant terrorist, Mani Turwa, who was said to be protecting the community against attacks.

Sources said they initially engaged Turwa and his team in a gun duel, during which they were repelled. The Guardian gathered that the terrorists thereafter turned their anger on the community, plundering and burning most of the houses.

Police Public relations Officer (PPRO), SP Gambo Isah, confirmed the incident but said he could not ascertain the casualty figure.

In a related development, gunmen shot at vehicle on Sunday afternoon along the Batsari/Jibia road. The PPRO was yet to confirm the Batsari incident as at the time of filing this report.

Meanwhile, the Kaduna Government will present its security report for 2021 today. The Commissioner for Internal Security and Home Affairs, Samuel Aruwan, is expected to present the yearly report to Governor Nasir el-Rufai.

Besides, the ministry will also present the security report for the fourth quarter of 2021 at the event, which will be held at the Council Chambers of Sir Kashim Ibrahim House.

El-Rufai, in 2019, established the Ministry of Internal Security, the first by any state government in the country and appointed Aruwan as commissioner.

Aruwan stated: “The ministry has introduced openness in reportage of security incidents with daily updates, quarterly reports and yearly reports. This reflects a commitment to transparency and the strength of the relationship the ministry has built with security agencies that trust it to responsibly handle security data.”

“The ministry has become a consistent source of information to the security agencies through its Operations Room, which is open 24-hours to receive reports from citizens.”

According to the commissioner, the 2021 security report follows the 2020 yearly report and the quarterly reports published in 2021. He pointed out that the reports provide a facts-based assessment of the security challenges the state confronts.