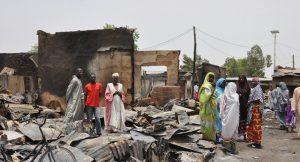 “There were four explosions inside the camp,” the coordinator of the Muna camp Tijjani Lumani told AFP. “The bombers struck at different locations around 4:30 am.

“The explosions triggered fires which burned down many tents”, he said, adding that casualties details were not known.

The emergency services confirmed the attacks.

“There were some suicide explosions in Muna camp. Our men have mobilised to the scene,” Ibrahim Abduljkadir of the National Emergency Management Agency in the region told AFP.

Muna camp, on the edge of Maiduguri, is currently home to tens of thousands of people who have fled Boko Haram.

The Islamist insurgency has killed at least 20,000 people and forced more than 2.6 million others from their homes since it began in northeast Nigeria in 2009.

Boko Haram has continued to target the internally displaced people (IDPs) and there have been several attempted suicide bomb attacks near Muna camp, which is not fenced off and is easily accessible.