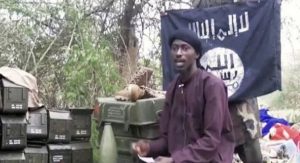 Leader of the Islamic State West Africa Province (ISWAP) and son of the late founder of Boko Haram, Mohammed Yusuf, Abu Musab Al-Barnawi, has been killed in Borno State, according to hallmarknews.com.

A report by Daily Trust Newspaper said the terror leader was killed in the last week of August 2021.

Al-Barnawi, son of Mohammed Yusuf, who was also killed by security forces in 2009 when he launched a war against the Nigerian state, had had disagreements with his father’s successor, Abubakar Shekau, which led him to break away from Boko Haram to join forces with the Islamic State.

Al-Barnawi was said to have been trained by ISIS for years ahead of his ascension to power.

Al-Barnawi sustained vicious attacks especially on military facilities and troops in the Lake Chad region while at the same time strategizing on how to subdue Shekau.

He controlled large swathes of territory in Northern Borno, imposed taxes on the local population and earned serious income from fishing asides from the financial and material support he got from ISIS.

Al-Barnawi’s fighters had also destroyed many military super camps in Dikwa, Monguno, Abadam and Marte in Borno; and other military facilities around Geidam in Yobe State.

He equally established many cells on the Lake Chad islands and surrounding villages from where his fighters launched attacks on Nigeria, Niger and Chad.

His death in August, after that of Shekau in May 2021, was seen as a turning point in the war against terror even as security experts had called for sustained offensive towards decimating the two rival groups to have a lasting peace after twelve years of uncertainty and carnage.

There are two versions of the story of Al-Barnawi’s death with one saying he was killed by Nigerian troops and the other version saying he died during a rival war within the ISWAP camp.

The first version revolved around the information shared among some security operatives in the theatre of operation, which indicated that he was ambushed by troops during which four or five top ISWAP leaders and many foot terrorists loyal to him were also killed.

A source said he was killed around Bula Yobe, a community near the Borno/Yobe states border along Mobbar and Abadam axis that leads to the Lake Chad area.

However, a different source said he was ambushed and killed at a place that could be accessed from Yale, Bama, Banki junction through the Kashimbri-Gulumba.