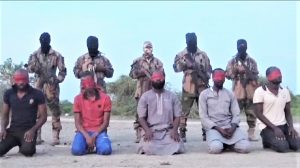 Militants from an Islamic State affiliate claimed responsibility Thursday for killing five aid workers who were kidnapped last month in northeastern Nigeria, like reported by abcnews.go.com.

The Islamic State West Africa Province, which broke away from Boko Haram several years ago, warned in June that it would target Nigerians working for international aid agencies along with those who helped the military. Nigeria’s president already had blamed the extremists for the slayings.

The group issued its claim online in its digital weekly newspaper, al-Naba, according to the SITE Intelligence Group, which monitors extremist groups. The aid workers were killed on Sunday, and a video of their deaths was later released on social media, SITE reported.

The alarming development threatens to further complicate relief efforts in northeastern Nigeria, where nearly 2 million people have been displaced by the ongoing insurgency. The U.N. World Food Program says 3 million in the northeast are facing hunger, and now also threatened by COVID-19.

The five were traveling by road to the state capital of Maiduguri when they were abducted last month by the militants. Nigeria’s presidency said the victims had worked for the Nigerian government and three international aid agencies: Action Against Hunger, International Rescue Committee and REACH International.

“They were committed humanitarians who devoted their lives to helping vulnerable people and communities in an area heavily affected by violence,” said Edward Kallon, the U.N.’s humanitarian coordinator in Nigeria.

Security has long been a concern for aid groups operating in the northeast, where humanitarian workers have been repeatedly kidnapped and killed during Boko Haram’s decade-long insurgency against the Nigerian government.

Those concerns have deepened though since the Boko Haram splinter faction warned last month that it would target civilians who help humanitarian groups. The splinter group previously was not known to target Muslim civilians but left threatening pamphlets in June.