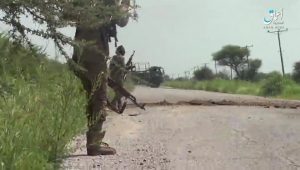 Several Nigerian soldiers were killed in an ambush on a military convoy near Gudumbali in the Lake Chad area of Borno state, sources said, after Islamic State claimed its fighters carried out two attacks in the area, like reported by thedefensepost.com.

One told AFP that “the terrorists surprised troops with an ambush as they were heading to Gudumbali.”

“We lost several soldiers, vehicles and weapons to the terrorists in the attack,” said the source, who asked not to be identified.

The convoy was travelling to Gudumbali to reinforce troops from Nigeria and Chad attached to the regional Multinational Joint Task Force for a major offensive to recapture the town from ISWAP, a second security source said.

He added that the losses had been great and that from reports coming in, the number of casualties was “huge.”

A third security source told AFP, “It is not precisely clear the number of casualties recorded in the attack but a number paid the supreme price.”

The MNJTF, which comprises personnel from Chad, Cameroon, Niger, and Nigeria, launched Operation Yancin Tafki in late February to battle insurgents in the Lake Chad area. It has said the cross-border operation is aimed at “making islands and other settlements in Lake Chad untenable for Boko Haram Terrorists.” MNJTF troops have engaged militants in Nigeria, Niger and Chad.

Islamic State earlier on Tuesday claimed fighters from its West Africa Province affiliate carried out two attacks in the area on Monday.

ISIS said ISWAP fighters ambushed a Nigerian army convoy between Damasak and Gudumbali, and struck another military position near the village of Garunda.

Gudumbali in Guzamala district is around 120 km (75 miles) north of Borno state capital Maiduguri, and around 20 km east of Garunda.

ISIS claimed “tens” were killed and wounded, three “trucks and armored vehicles” were destroyed and that nine vehicles, weapons and ammunition were captured.

“Super camp” strategy increases ambush risk
ISWAP began to intensify attacks on Nigerian military targets in July 2018, killing dozens of soldiers, overrunning bases and capturing towns. The Lake Chad area of Nigeria, Chad and Niger, where it is the dominant insurgent group, has seen particularly fierce fighting, but it has also claimed or been blamed for attacks in the Maduguri area and further west.

ISWAP fighters have continued to attack troops in the area, and ambushes have become more frequently employed tactic, perhaps as roadside vegetation has grown during the rainy season, offering cover for attacks on vehicles.

The Nigerian Army has also adopted a “super camp” strategy that seemingly extends on its previous “garrison town” system. The strategy entails military personnel withdrawing from smaller bases in towns and villages, concentrating forces in “super camps” which are more-easily defended from ISWAP attacks.

The strategy reduces the risk of both military casualties and materiel losses, it also reduces the Nigerian Army’s ability to combat ISWAP in rural areas and gives the militants more freedom of movement, Jacob Zenn, adjunct assistant professor at Georgetown University and senior fellow at The Jamestown Foundation recently noted. The concentration of forces enables mobile counter-insurgency raids, but those military movements themselves present ambush opportunities for ISWAP.

The drawbacks of the “super camp” strategy became apparent on August 21, when ISWAP fighters reportedly entered Gubio and Magumeri unopposed, taking control of both towns and burning government buildings.

Borno state governor Babagana Zulum later expressed concern about the strategy, warning that “the absence of the Nigerian military in a particular place will create a vacuum” that insurgents could exploit.

Soldiers withdrew from Gudumbali in December last year, after ISWAP fighters had repeatedly attacked troops in the town.

On December 4, ISWAP fighters attacked a military base in Gudumbali, sparking a fierce firefight in which two soldiers were injured. Ten days later, ISWAP militants again attacked Gudumbali, with ISIS claiming five soldiers were killed and others injured. The Nigerian Army said troops had repelled an attack, but that one soldier was killed and another wounded in the firefight. Other reports said a dozen or more troops died.

Recent attacks in Lake Chad area
On September 4, ISWAP fighters killed at least three Nigerian soldiers and a police officer in attacks in Gajiram, around 50 km south of Gudumbali. ISIS claimed 10 soldiers were killed and others were injured.

That came just days after at least three Nigerian soldiers were killed in an ISWAP ambush between Gajiram and Monguno on August 30. Two military sources told AFP that eight troops were killed, but the Nigerian Army later said that only three were killed and eight others injured. ISIS propaganda agency Amaq later released a video that it said showed the ambush.

In an incident attributed to “Boko Haram,” four people were killed and 21 women were abducted when militants attacked Gajiram on August 25, Daily Trust reported.

On August 24 and 25, ISIS claimed ISWAP fighters had targeted soldiers in Niger in two IED attacks in the Lake Chad area.

Late July saw the deadliest incident in recent months, when 25 Nigerian and Chadian soldiers were killed in clashes with ISWAP fighters near Baga that left at least 40 insurgents dead, AFP reported.

The area around Baga has been contested since late December last year, when ISWAP fighters overran military and naval bases in and around the town, which is on the shores of Lake Chad, around 70 km east of Gudumbali. One base that housed MNJTF troops was recaptured weeks later, but Baga itself and a separate naval base on Lake Chad remained under ISWAP control in August, according to AFP sources.

A decade of Islamist insurgency
The jihadist group known as Boko Haram began its bloody insurgency in northeastern Nigeria in 2009, but it has since spread into neighboring Niger, Chad and Cameroon, prompting a regional military response.

Boko Haram split into two factions in mid-2016. One, led by long-time leader Abubakar Shekau, is notorious for suicide bombings and indiscriminate killings of civilians. Shekau pledged allegiance to ISIS leader Abu Bakr Al-Baghdadi in March 2015, but ISIS central only gives formal backing to the other faction, which it calls Islamic State West Africa Province.

The ISWAP faction, which largely focuses on attacking military and government targets, was led by Abu Mus’ab Al-Barnawi, but in March, audio recordings revealed that ISIS appointed Abu Abdullah Idris bin Umar, also known as Ibn Umar al-Barnawi and Ba Idrisa, as leader. Despite releasing several videos featuring ISWAP since, ISIS has not yet made a public statement confirming the change.

On September 10, the United States added Ba Idrisa to its Specially Designated Global Terrorist list. The U.S. Treasury Department sanctions listing named him as Abu Abdullah Idris bin Umar Al-Barnawi and “Ba Idrisa” and said that he was born in Maiduguri between 1989 and 1994. The listing did not specify which group he belongs to.

The U.S. assesses that Boko Haram and ISWAP have been responsible for more than 35,000 deaths since 2011. More than two million people have been displaced, sparking a dire humanitarian crisis in the region.